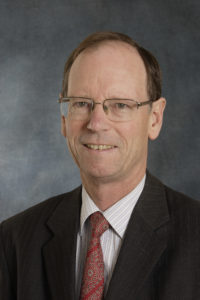 Richard Stark is a visiting neurologist at the Alfred Hospital.

He graduated top of his year from Monash University in 1973 and was then intern, RMO and Neurology Registrar, under Bernard Gilligan, at the Alfred Hospital. He continued his training overseas at The London Hospital with Ronald Henson and then at National Hospitals for Nervous Diseases, Queen Square, in London as the Australian Association of Neurologists appointee. His travel was supported by the Bushell Fellowship of the RACP.

On his return to Melbourne he was appointed Visiting Neurologist at the Alfred Hospital, and also at Caulfield Hospital and the Peter MacCallum Cancer Institute. He has taken a great interest in teaching at both undergraduate and postgraduate levels and is Adjunct Clinical Associate Professor in the Department of Medicine, Monash University.

He has been a member of the Committee for Examinations of the Royal Australasian College of Physicians, External Examiner for the M Med, Malaysia and Senior Examiner for the Australian Medical Council.
His major areas of clinical interest have included headache and the neurology of cancer. He has been involved in many multi-centre trials of migraine treatments and has been a proponent of active intervention, using intravenous lignocaine, in patients with severe analgesic rebound headache. He has had more than 50 articles published, including recent reviews on migraine management in Australia. He is President-Elect of the Australian and New Zealand Headache Society. He has a busy practice which deals predominantly with difficult-to-manage headache and has extensive experience in managing chronic migraine.

He is a Member of the Australian College of Legal Medicine and is chairman of the reference committee and teaching panel in neurology for the implementation in Victoria of the 4th Edition of the AMA Guides to Permanent Impairment.

Professor Stark has served on Advisory Boards and received speaker fees for Allergan, Novartis and SciGen