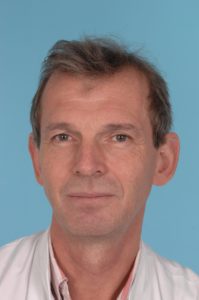 
Joost Haan, MD, PhD, born 21-7-1956, works as a neurologist at Leiden University Medical Center and the Alrijne Hospital Leiderdorp. He received his medical degree in 1982, his speciality certificate in Neurology in 1988 and his PhD on “Hereditary amyloidosis” in 1990. His research is on the genetics of headache and stroke. He (co-)authored many peer-reviewed publications and several books, mainly on clinical genetics. He also published several books on Neurology and Literature (eg. Migraine als Muze and De Trillende Tuinman en andere Parkinsonbeelden). He finished his BA of Film- and Literary Studies at Leiden University in 2015.

Professer Haan has no disclosures to declare