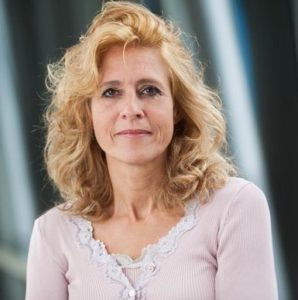 Gisela M Terwindt's special interest is headache and Cerebral Hereditary Angiopathies(CHA). She diagnoses >1500 new headache patients/year and aims to combine scientific and clinical work. She introduced a semi-automated questionnaire system (LUMINA and LUCA), and is currently developing other interface tools (“headache diary app”). She also includes her patients in clinical trials with state of the art new treatments. For this she does her own, independent trials but also collaborates with pharmaceutical companies or companies working on neuromodulation.

She has held the leading the Headache outpatient clinic since 2007 and is responsible for the supervision of the Neurology residences, PhD’s and headache nurses, but also sees headache patients herself.  Furthermore, she runs the CHA outpatient clinic for patients with CADASIL, RVCL-S, and HCHWA-D (hereditary CAA).

For the headache patients she already has her own DNA-collection system, which has been very successful with >6000 migraine DNA samples, and >1000 cluster headache DNA samples and four top publication in Nat Genetics.  She is PI for the TRF headache, and co-PI for the TRF CHA. The LUMC is the only academic hospital in the Netherlands with special expertise in headache and CHA disorders.

Gisela M Terwindt's research interest is to unravel neurobiological and molecular triggering mechanisms leading to migraine attacks, and to identify treatment targets for the acute treatment and prevention of attacks and disease-chronification (with Professor MD Ferrari and Professor VD Maagdenberg). Disease pathology is studied through her collaboration with world-renowned scientists, and her unique integrated clinical, molecular, and biological approach with large patients cohorts, transgenic mouse models, and newly developed iPSC technology. Her special interest is into chronification, an increasingly recognised and highly disabling complication of migraine and other episodic headache disorders that may occur in up to one-fourth of patients, ultimately resulting in a chronic disease state with daily or nearly-daily attacks (VIDI grant). In an additional, but strongly related project, she is studying the pathogenesis of rare monogenic disorders such as FHM (familial hemiplegic migraine) and CHA (Cerebral Hereditary Angiopathies) which may serve as genetic models to study the pathogenesis of migraine but also improve mechanistic insight in the pathophysiology of other common neurovascular disorders, including stroke and dementia. With this she is increasingly involved in the relationship between migraine and stroke with a special focus on women (CREW), and she has a special interest in the study of female-specific trigger factors and complications in migraine.

Professor Gisela M Terwindt has no disclosures to declare